ADVANCE WARNING: THIS IS A LONG ONE

It’s that time of the year and the inquiries as to the date of this year’s Ananke Day have started to pop up. So, without further ado, I am here to announce that there will not be an Ananke Day 2014.

You read that right. Nothing happened to the batch, we just never made one. This wasn’t an oversight, but rather a deliberate transition from our existence as a single-location brewpub to a brewery with wholesale distribution (and a brewpub to go with it). Ananke is named for the primeval goddess of necessity but the mythology of the goddess is that she is also the mother of fates and both mortals and gods alike respected and paid homage to her, as only she had control over their destinies.

The destiny for Freetail Brewing Co. is a transition to grander things: a big new brewery, new (and presumably functional and reliable as opposed to the used and abused stuff we’ve gotten by with) equipment, beer for wholesale distribution, an expanded barrel program, and a greater growth potential for our company.

In Ananke’s place, we will have the final two wild ales produced before we move to the new brewery (and I know I’ve said this before… but FOR REAL THIS TIME): Makaria and Endymion. We will release these beers at SuperMegaAwesome Bottle Release Day 2014, to take place in September. The logic behind the timing goes something like this: we’ve developed a specific character in our wild ales that lives by it’s own rules within the oak staves of our barrels. We want to continue to allow this character live and evolve in those same barrels. Very soon after we commence with the first brew at the new brewery, we will brew a base beer for the wild ale program. To ensure the livelihood of the bugs that reside in those barrels, we will empty them at the pub (they’re currently filled with Makaria and Endymion) and then transfer them to South Presa right as the new sour beer is ready to be transferred into barrels. We expect this transfer to occur sometime in July. We’ll then bottle up Makaria and Endymion and then set them aside for conditioning for release in September.

So, about these beers:

In Greek mythology, Endymion was an astronomer who Pliny the Elder (the man, not the beer) credits as the first human to observe the movements of the moon. Endymion was granted eternal sleep as to never age or die. In this same spirit, we created this wild ale, made from our psuedo-Solera process in which a barrel is never completely emptied, but rather topped off with fresh base beer whenever aged beer is extracted (beers previously extracted have been going by the moniker “SoleraTail”). While constantly evolving, the resulting blend is granted its own eternal sleep so that it may live forever.

As for Makaria, I strung you along before explaining what this was for a reason. Think: Black Ananke. We feel this is an appropriate end to the barrel program at the brewpub. Makaria is the daughter of Hades and represents a merciful death as opposed to one of misery and utter destruction. This black ale shares its genesis with Ananke, our sour-mashed witbier left to evolve in its wooden tomb. We brewed this batch on Christmas Eve 2013 for release on Ananke Day 2014, which for reasons previously stated will now be SMABRD ’14. 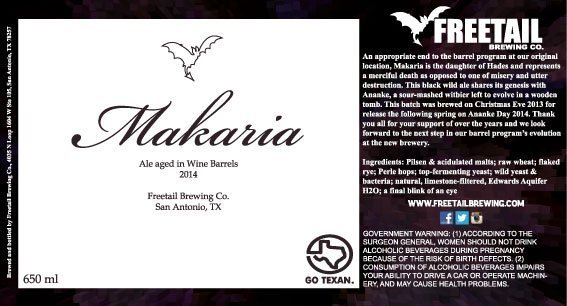 Thanks for your patience on this. I know you’ll find the wait is worth it!

I’m also happy to use this opportunity to announce the return of RealTail after a year hiatus. RealTail 2014 (which marks the 4th occurrence of the event, and the collaboration beer will be the third iteration) will be on Saturday May 17, 2014. We’ll have at least 8 Real Ale beers on tap including special releases from their Mysterium Verum and Brewers’ Cut series. The collaboration beer is affectionately called “Ebony and Ivory” by the respective brew teams, though the name doesn’t find it’s way onto the label. The style: It’s a Black White IPA. I’ll leave you to figure out it out from there. 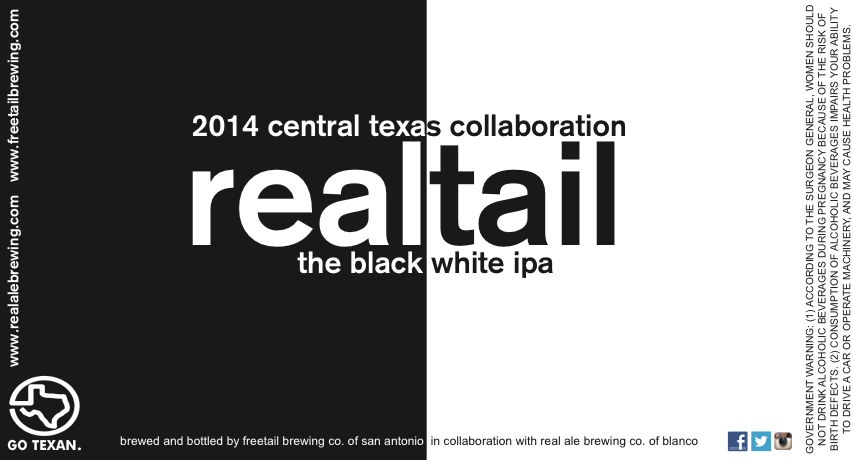 BUT WAIT THERE IS STILL MORE!!!

I’m also extremely proud to announce a collaboration years in the making with my close friend Dan Wiersema of the Free Beer Movement (FBM). FBM is a grassroots movement of American soccer fans sharing their passion for the game with and educating not-yet-converted, but willing, friends, family and colleagues in exchange for a beer here and there. You probably know we’re big soccer fans at Freetail, so this is one we’ve been super excited about. The beer, “We Are Going to Braz-Ale” is a “Super Patriotic” (and super hopped up) Red Ale just in time to cheer on the boys in Stars and Stripes for the World Cup. This beer will be ready just in time for the first kick-off and we’ll it on draft and in bottles. We’ll also have some awesome T-shirts available as well. 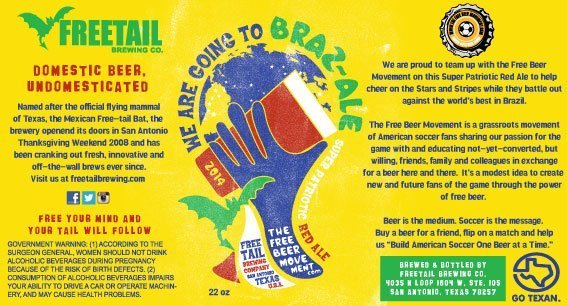 The last thing is that we’ll have one other beer we bottle up before we move the bottling line to the new brewery. But details will be kept to myself on that one. For now, I’ll just tell you that we’re trying to round up everyone who has ever helped brew at the original location for the very last brew before we commence operations at South Presa. This beer will not only be a celebration of our new place, but of the crumbling of antiquated laws that kept us from distributing until recently. Your only other hint:

I’m gonna make a toast when it falls apart
I’m gonna raise my glass above my heart
Then someone shouts “That’s what they get!”