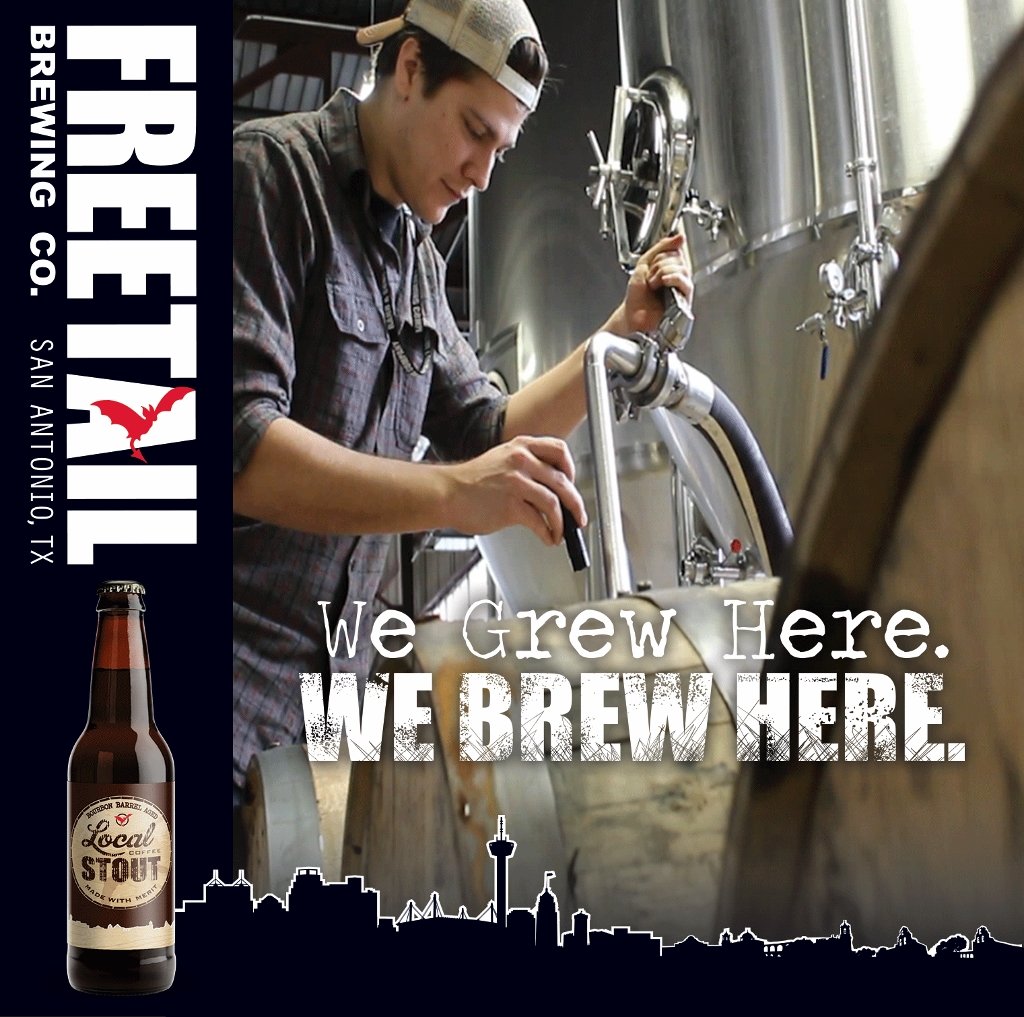 Back in… I think 2009… we released bourbon barrel aged La Muerta. Much to our dismay, it eventually turned sour and was worthy of only one thing: pouring down the drain. It was then that I vowed NO MORE BOURBON BARREL AGED BEER! (Even though I believe we did do one more barrel aged Old Bat Rastard if memory serves me correctly, and we have done one-offs in 5-gallon bourbon barrels sourced from craft distillers).

But, you know, times change. We all get older, some of us mature. Since those olden times, we’ve built a new brewery and we (feel like we) have a better grasp of the barrel-aging game.

By now, you should be familiar with Local Coffee Stout. If you aren’t, go back in time on this blog and educate thyself. Then, go find a bottle and enjoy it. It’s FREAKIN’ DELICIOUS. When we were conceptualizing Local Coffee Stout, we knew we had to age this in bourbon barrels. And thus began a quest in which Head Brewer Nick Adcock (one of 3 head brewers we have… because we are like a hydra) searched far and wide to find us enough barrels to make it worthwhile. Lo, Nick found us a dozen freshly-emptied Woodford Reserve barrels and in went Local Coffee Stout for a brief one-month stint. Why only one month? Lots of breweries make a point of emphasizing how much time their beer sits in their wooden bourbon-soaked tombs. To be honest, given the balance of bourbon-barrel and base beer character we were hoping to achieve, we found that one month was really all it took. Anything longer would have allowed the bourbon to dominate and overpower the coffee character, which sort of defeats the purpose of aging a coffee beer. The key for us here is balance. With this beer, we aren’t trying to present a preeminent dissertation on bourbon and beer but rather a nice balance of the character of our original beer, that excellent coffee flavor, and the bourbon barrel.

Some tasting notes: if you pull this straight out of your fridge, the bourbon aroma will be faint. Let it warm up, and the fruity American white oak character of the bourbon will come through along with a heavy char and the typical vanilla accents. Coffee is still present but definitely in the background. Take a drink and you’re met with a rich, creamy mouthfeel, roast bitterness offset by the sweetness of the coffee and a slight smokiness from the bourbon. Subtle alcohol heat that doesn’t overwhelm (a pleasant result of limited barrel aging time).  Super Head Brewer Jason Davis says “it’s like drinking bourbon filled chocolate.”

So… where do you get it? Glad you asked.

For OFF-PREMISE BOTTLE SALES. 22oz bombers will hit the shelves this coming Tuesday, March 10. Below is a list of accounts that will receive cases. Please note, we do not have control over the price or quantity that each retailer will sell this for. We also cannot control when they will receive their allotment. It will all be on a truck to each of these accounts for sale at some point on Tuesday. Please contact the individual stores for exact details.

For ON-PREMISE DRAFT TAPPINGS: We have a limited number of kegs and we will announce each tapping as they occur. The first tapping we have to announce will be at 3pm THIS FRIDAY (that’s tomorrow) at the grand opening of Big Hops’ new location at the Hays Street Bridge. These guys are killer and we want to help them open their newest location with a bang.

For those of you who may miss the release, we will have a limited number of bottles at our two locations starting Thursday 3/12. Note, this is not a bottle release like we have done in the past. We will just have the beers on the shelf when we open. The brewpub on 1604 opens at 11am, the S Presa tasting room at 4pm