Today’s post is another relatively short one, based on a simple graphic.

The graph below shows the number of Brewpub Licenses active in Texas from 1993-2010.  As you can see, after an initial boom in the 90s, brewpubs as a business type have struggled to grow in Texas.  Meanwhile, the number has exploded in the US.  In 1986, America’s 5th brewpub opened and as of July 31, 2010 there were 994 brewpubs operating. 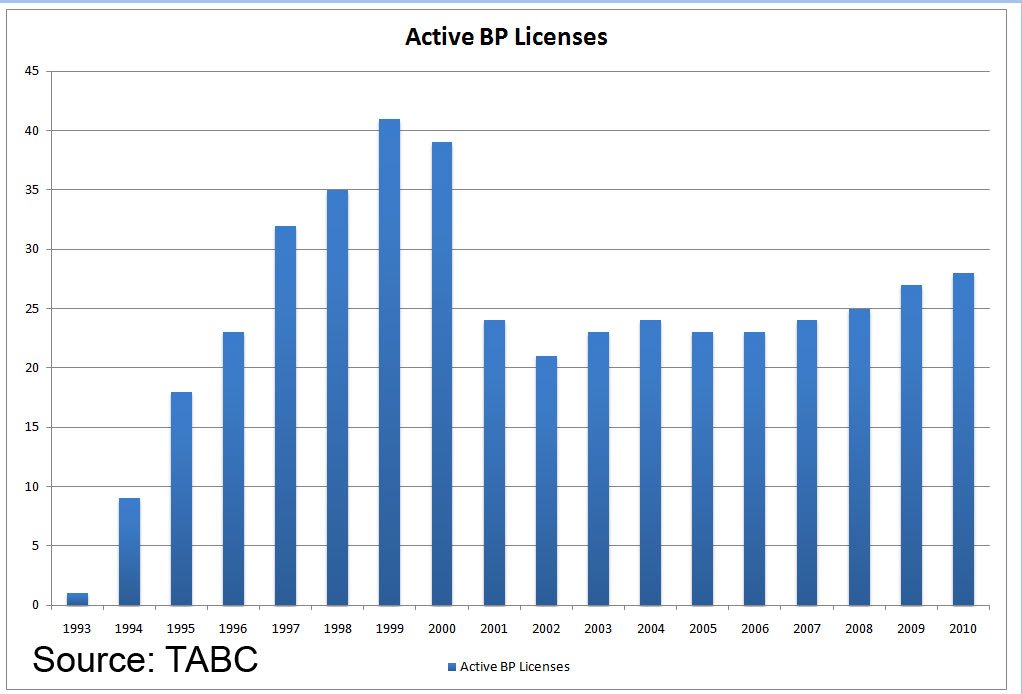 A couple of important notes.  This represents the number of active BP Licenses issued by TABC, not the number of operating brewpubs.  So, for example, while Waterloo Brewing Co. in Austin (the 1st brewpub in Texas) closed in 2001, its license was active until 2002 – so that is when it drops off the chart.  There are also a number of licenses issued to places that may not have ever brewed a batch of beer as a brewpub.

In other news, Committee Preference Cards are due from House Representatives today.  Based on these preferences, committees will be assigned, which will be crucial to the fate of HB 660 and every other bill filed.  Something we will definitely keep an eye on.

Ted at the Barley Vine has another blog post about HB 660.

Calily of Micah brews. Calily cooks. has a post on HB 660 with the KENS 5 television story embedded. (PS: if someone can teach me how to embed it here, I’d love to do that).