Most of you may not know a little background about me: I’m a economics geek and as of Fall 2013 a retired economics prof. While I miss teaching, I definitely appreciate the additional time I have to focus on the brewery, especially as we prepare to expand.

The other night I was missing teaching a little more than normal, and I got the idea for a fictional series of beers designed to teach some basic lessons in introductory economics and point out some of the crazy stuff I see happening in the beer industry. 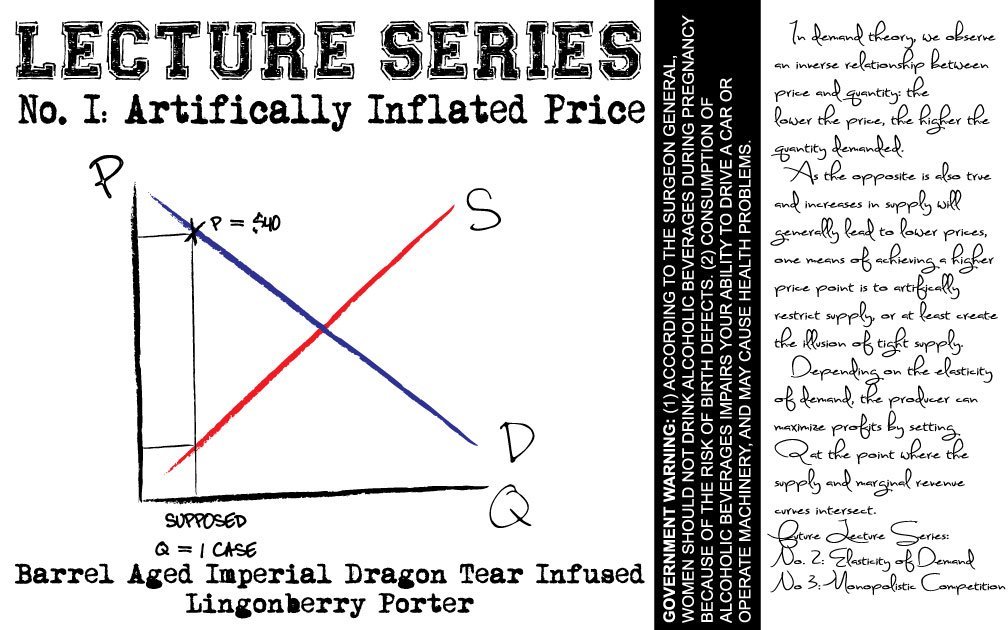 The first lesson deals with artificially restricted supply. There are a lot of reasons a brewery might choose to do this, and most of them don’t have anything to do with greed or malice.

First, it’s easy to observe how relative scarcity of a product leads an overall enhanced reputation, or allure, of said product. An example I’ll use throughout this post is with our own imperial stout, La Muerta. We got to a point a few years ago when it was selling out right away, so we made more. Then it sold out again, so we made even more. Now not only does it not sell out right away anymore (we are down to about 50 bottles left of 1500 sitting on our shelf 20 days after it was released), but it sells at a slower pace than it did previously. Part of that is people don’t feel the need to rush out and get it (which I think is a good thing, I like that people don’t feel like they are fighting over the last Furby at Christmas for one of our beers). But another part is that the beer isn’t as appealing as it used to be, because it isn’t as scarce.

A more malicious reason for doing this is to artificially drive up the price of the beer. Price is the ultimate rationing mechanism, so as a good, service of resource becomes more scarce, the equilibrium price for said good rises. So, make it more scarce, you can charge more. This isn’t in itself that malicious, but as with most things in this world, perception is reality. So if I can make you THINK it’s more scarce that it really is, you’ll be willing to pay more, and my overall revenue is higher as I sell for a higher price (there are other factors in play here, which I will cover in future Lecture Series. No. 2 will be on Elasticity of Demand and No. 3 will be on Monopolistic Competition to round out the lesson on this particular point).

At Freetail, I make a point of being as transparent as possible. We don’t raise the prices of the beers we make, even when we can. We are honest about how much there is. And we are honest when we say that we’re trying to make more (hence, the building of a new brewery). Hopefully you trust us, and appreciate our approach to fair beer dealings. And by no means am I accusing high priced beers of being guilty of artificially inflated prices… just something to whet your conspiratorial appetites.