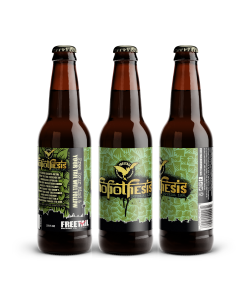 Hop Megatron Bombs… with a splash of citrus

Last month we told you that we’d heard you loud and clear and would be making Hopothesis more often. Instead of a once-a-year release, Hopothesis will now be a semi-annual release. We packaged up the fall 2015 batch last week and it will ship out to our distribution partners next week and hit stores shortly thereafter.

Longtime Hopothesis drinkers know that we change up the hop with each batch. This version features a couple of hops that have been in vogue as of late: Citra and Mosaic. Both hops feature prominant citrus and tropical fruit notes. Our favorite approach to hopping IPAs is sharply increase the hop charge as the boil progresses and couple that with ample dry hopping. This method gives us the result of an IPA that is full of wonderful hop flavor and aroma without an overwhelmingly bitter finish.

When you get a hold a Hopothesis, take in a big whiff and you will immediately note pineapple, lime zest and resinous pine. Beware the drinkability, however, as Hopothesis weighs in at 8.8% and 80 IBU. We recommend sharing a bottle with your favorite hophead.