Okay, so now what?

As most of you probably know, we celebrated our second anniversary this past weekend and an amazing time was had by all.  Seeing 35 of our beers crammed onto the board was a beautiful thing to see, even if not the most reader friendly.  Another thanks to all of you who have made the last two years so great. 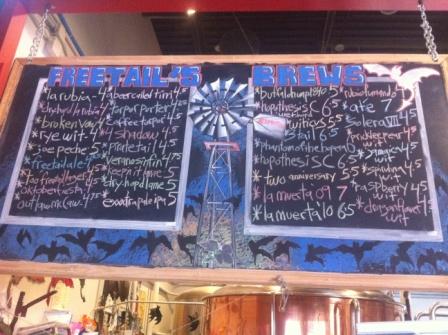 So now that we’re another year older, and presumably wiser, what’s next?  Well, you can count on the same philosophy that has gotten us to this point.  Fresh ingredients, good eats, solid brews and maybe something wacky every now and then.

For me personally, year 3 brings a handful of fun but especially challenging projects.  Of course there is Project: Gemini, which you probably already know about.  My head brewer, Jason Davis, and I will be in Houston on Wednesday December 8 to hang out and get a better feel for that city.  Jennifer Litz, of Texas Girl Pint Out one of the driving forces behind the #FreetailHouston campaign is organizing a place where we can all get together, drink some brews and answer questions, so keep an eye on either of those blogs.

One of the toughest things about Project: Gemini, is the inevitable disappointment when we eventually pick the site of our next location.  We’re looking at Houston, New Braunfels, San Antonio and San Marcos, but will only choose one.  People in each of those cities (in addition to some friends of ours in Branson, Missouri who have their own #FreetailBranson grass-roots campaign going) have expressed tons of excitement and support so it will be a tough decision.  In the end, they’ll all be a great home for a brewpub and I hope there is someone behind us to move in if we don’t.

Another big initiative of mine goes beyond Freetail, and I believe it is one that can forever change the beer landscape in Texas.  I am in the process of working with our State Legislature to introduce a bill that would allow brewpubs to sell to wholesalers, so that the wholesalers could sell to retailers, so that the retailers can sell to you.  While it seems like a no-brainer that Texas Small Businesses should have the same market access as non-Texas Small Businesses (an out-of-state brewpub can sell to Texas wholesalers, but a Texas brewpub can’t), this is still a highly contentious issue.  Recent comments by members of the Wholesale tier indicate a long, uphill battle to affect legislative change that would help Texas businesses and give Texas consumers access to a wider range of products.  But I’m a believe in justice, and I think it’s just a matter of time before Texas laws are changed to put Texans first.

For the record, I believe in the 3-tier system.  But I don’t believe in a system where one party exists because of and benefits from a legislative mandate.  I believe wholesalers are invaluable to the beer industry.  I’m a beer maker, not a beer warehousers and deliverer.  I’m not interested in owning trucks or keeping tabs on thousands of accounts, and I doubt I’d be good at it.  Wholesalers, on the other hand, are usually really good at it.  But when positive changes that would help businesses and give customers more choice are the victim of protectionism, the Economist in me gets a little ticked.  I don’t buy the argument that we are one step away from tied-houses if we allow Texas breweries to grow.  Even if we were, my reaction would be “bring it on!” (coincidently, this is the same reaction I have to a large national beer-bar chain buying a billboard in my parking lot).

I can go on forever about this topic… look for a plethora of posts on it coming soon.

So that’s pretty much it for my agenda.  Another year in the books, lots of excitement surrounding the next.  What do you have planned for Freetail Year 3?  What would you like to see in Year 3, not just for Freetail, but for Texas Craft Beer in general?