Why I Do It

It didn’t take long after Freetail was open, serving beer and attracting customers for strangers to start approaching me asking if I needed investors or if I would franchise out the concept.  (To be clear, I would never, EVER license to a franchisee.  For starters, as anyone who knows me will tell you, I am way too much of a control freak to allow that to happen; and second, that isn’t how I roll).  My response is always the same: “why would you want to be invested in something like this?”  The answer, usually, “it seems like a good money-maker.”  And that is the summation of why I wouldn’t go into business with that individual.

Seem counterintuitive?  Certainly an economics professor and businessman such as myself understands that businesses exist to generate a profit, right?  I”ve been teaching undergraduate economics for six years, explaining that very concept to students.  So why wouldn’t that alone be the basis for choosing business partners?

I’ve met a lot of people who want to start breweries, some of them more likely and/or viable (but not necessarily both likely and viable) than others.  I’ve given a talk I wrote, Dollars and Sense: Formulating and Funding Your Brewpub and national conferences in addition to local seminars.  It seems EVERYONE wants to start a brewery (especially if you live in Austin).  I can’t blame them, this is the best job in the world.  But not everyone has the same motives.

One of the roles I like to play to the would-be brewers I meet is that of financial advisor.  I tell them they’d be better off opening a bunch of Subway franchises than a brewery.  I make it very clear, even to people who I’m trying to raise funds from: breweries and brewpubs are not grade A investments.  The capital requirements are significantly more intense.  The returns are signficantly lower.  The risk factors are astronomically higher.  There is a reason you don’t see Donald Trump Brewing Co. right off Central Park West. 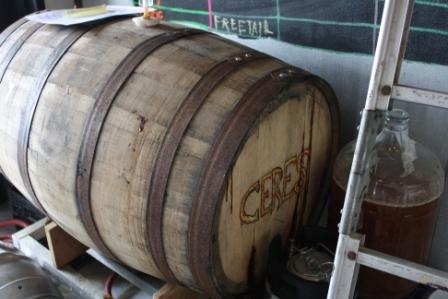 Because no other job I’ve had allows me to conduct experiments like Ceres.  Ceres is a used whisky barrel we purchased through a friend from the Four Roses Distillery in Kentucky.  We were excited when Ceres arrived, and we immediately filled her up with a brew most of you know, La Muerta.  In a few months we would have Barrel Aged La Muerta, and my email box and twitter began to light up with messages from excited craft beer fans.  I was excited too, barrel aged imperial stouts are one of those styles that stand up and shout “I am beer! I am glorious! I am Special!”

As the story turns out, something happened inside Ceres, and except for what was immediately released on draught and a few bottles, an infection took over and we had a bunch of lactic (sour) La Muerta.  The whisky character was gone and all that was left was this sticky, slightly acidic, roasty beer that (as those who saw my face when we cracked one open at the most recent Dia de La Muerta bottleshare can attest to) was not enjoyable.  FAIL.

But the story of Ceres was not a complete disaster.  While we didn’t anticipate what happened with Barrel Aged La Muerta, we expected to have a sour barrel on our hands at the second fill.  In went our Olde Ale, Old Bat Rastard.  What came out (Barrel Aged OBR) is one of the beers I’m most proud of.  A slightly acidic, slightly Brett, Olde Ale that was not only delicious, but I felt very accurately represented the style.  Ceres produced a hit.

Ceres went on to then become the vessel for our Solera series, in which we filled the barrel and then pulled portions out from time to time, refilling it with new beer each time.  The Solera beers were constantly evolving as the character of the oldest portions were constantly blended with new additions.  At our Anniversary Party, November 26-28, we will release “Solera Fin” – that last of the Solera before the barrel is retired.  It will be significantly different from Solera’s of the past, which all used Freetail Ale as the base beer.  What’s different about Solera Fin?  Well, we finally found a home for all that sour Barrel Aged La Muerta we had left over… It will be interesting to see the outcome.

And that’s why I do it (in a nutshell, of course).